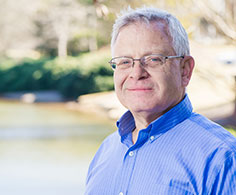 "As an engineer, I enjoy getting my hands dirty and then following up with the analytics."

Don Roberts knew early on that he wanted to follow in his father’s footsteps and become an engineer. And it was Don’s extensive military background that eventually helped him achieve it.  After receiving a Bachelor’s degree in Mechanical Engineering from the U.S. Naval Academy, Don joined the submarine force as a commissioned officer on three nuclear-powered vessels. He returned to the Naval Postgraduate School to complete his Master’s degree in Mechanical Engineering and gained vital experience as an instructor at the academy.

Don entered the motor vehicle accident reconstruction industry in 2001 and, in 2008, moved from Charleston, SC to join the Charlotte office of DELTA |v| as a Professional Engineer.  Now, as a Senior Engineer, Don is regularly involved in complex commercial vehicle accidents involving full scale reenactments and human factors issues.  He is also well versed in harvesting onboard digital data from vehicles of all kinds.  Don’s teaching experience gleaned from his time at the military academy and his calm demeanor have made him an effective communicator in high-pressure legal proceedings.