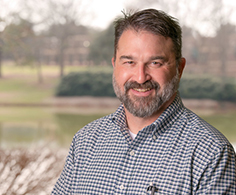 "Engineering is in my blood and my first professional love is accident reconstruction, so I’m delighted to be a part of the DELTA |v| team."

John Liechty joined DELTA |v| in 2016 and he has been a great addition to the team. His excitement about the heavy vehicle event data recorder (HVEDR) and accident reconstruction work DELTA |v| is doing, as well as his longtime friendships with a few DELTA |v| employees, have helped him fit in very well.

John received his Bachelor’s degree in Mechanical Engineering from Auburn University. He’s since participated in various continuing education opportunities, including the most recent ARC-CSI Crash Conference hosted by the Collision Safety Institute and Collision Publishing.

John knew from the age of seven that he wanted to follow in his father’s footsteps and become an engineer.  As a kid and later as a teenager he would help his father keep the family vehicles in good order and on weekends he would help friends work on their dirt track cars, hot rods, and road racers.

John applies his love for motor vehicles and problem-solving to his latest auto restoration project, a red 1974 Chevy Camaro. He also enjoys exploring the great outdoors, whether that’s by riding his motorcycle or hiking through the backcountry.