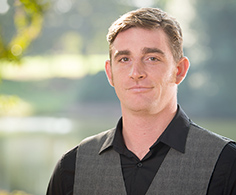 "Any single digital media technique can be limiting…I enjoy blending them."

Jason Young joined DELTA |v| in 2006 as a part-time draftsman while completing his Bachelor’s degree in Electrical Engineering at the University of North Carolina at Charlotte.  His contributions began in 2D drafting and quickly expanded to include 3D photogrammetry, 3D animation and video analysis.  Since then, he has received factory certified training from EOS Systems on the use of PhotoModeler software and photogrammetry techniques.  Jason has complemented these skills with his graduate level engineering education in computer visioning.

Jason is DELTA |v|’s resident calf farmer. Living on 400 acres of open expanse in Marshville, N.C., he enjoys all that farm life has to offer including 100 foot wet slides, operating heavy equipment, and mending fences.