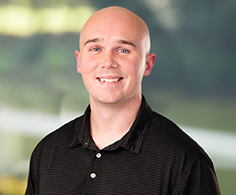 Dylan Steimel joined DELTA |v| in 2021 as Animation Programmer and Developer with the Digital Media team, REDLINE. After completing his Bachelor’s degree in Mathematics from UNC Charlotte, Dylan looked to start a career where he could put into practice the skills he learned in school. DELTA |v| and REDLINE provided that opportunity, but what really excited Dylan about his new role was the enthusiasm of his new teammates and the ability to work with so many different animation and modeling software.

In his role, Dylan programs tools or various other scripts to help with producing animations. He thrives on the balance of problem solving and creativity that REDLINE embodies.

Outside of work, you can find Dylan studying to pursue his Master’s degree in Data Science and Analytics, spending time with his dog at the lake, playing board games with friends, and weightlifting.